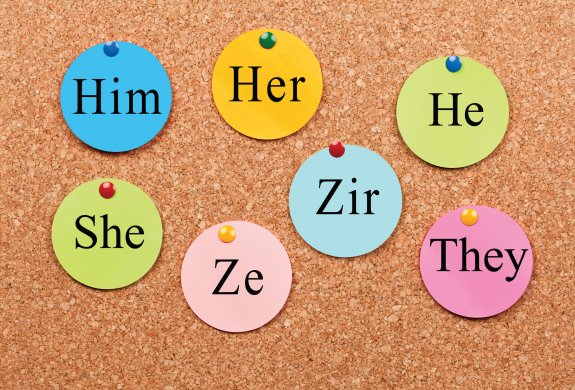 I want to have a conversation about pronoun declaration and best practices around it sparked by this aspect of the issue coming up 3 times in the past month: that asking or semi-requiring people to declare their pronouns in public can be harmful to non-cisgender people.

This is not an aspect of the issue I’d come across before. In all other discussions of declaring pronouns (usually in the context of convention badges) the general idea I got was that non-cis folks declared so that people wouldn’t accidentally misgender them and folks who are cis or cis-passing were encouraged to declare to normalize the practice and not put all the work and markers on the marginalized group in this equation. This all seemed reasonable to me.

I don’t remember how long ago we started, but for at least a year I’ve been asking Writing the Other students to declare their pronouns where their name appears in discussion areas or video chats. Just before the last class I got an email from a student concerned about this practice because they’d had discussions with nonbinary and trans friends about how pronoun declaration made them uncomfortable in situations where they might not want to be out to people about their gender. At the time, I wasn’t sure what to do with that (my initial thought was that students didn’t have to put pronouns that matched their gender if they didn’t want to, but then realized that’s not an actual solution), so I kept it in the back of my mind and decided to discuss the issue with smart folks I know in person.

About two weeks ago the issue came up again in a private forum that’s mostly cisgender people, so the discussion wasn’t as useful as I hoped.

And then this week a friend on Facebook posted a status saying that all people should put their pronouns in their email sig and social media profiles. I happened to check in on that discussion a little while ago and the issue of pronoun declaration making some trans and nonbinary folks uncomfortable came up again. This made me think it was time to have the discussion about it, even if it happens online, because it keeps coming up. Plus, there’s a Writing the Other class starting at the end of this month and I want to have a firm understanding of the issue so I can craft our policy for that and future classes.

For that specific scenario, I would like to craft the pronoun declaration statement in a way that does not isolate people or force them to out themselves in ways they find uncomfortable. I still want it to be clear that I don’t only want non-cis students to declare. Maybe the classes aren’t the right space for this, anyway, and I should drop the ask. I’m not sure.

For scenarios outside of this, I’d like to be able to speak knowledgeably about why pronoun declaration might be a problem and ways to mitigate it or, at the least, understand the objections to it.

Before I open this up to discussion I want to stress that this is absolutely not about cisgender people feeling uncomfortable or resistant to the idea of declaring pronouns. That’s a separate issue and discussion altogether. And one I’m frankly not here for.

I welcome all ideas and thoughts and even disagreements on this topic as long as you follow the rules of constructive discourse. No using slurs, no bigoted language or attitudes, no punching down. Also, the way I have comments set up on this blog, the first time you comment it automatically gets sent to moderation. Once I release the first comment from the queue others will post immediately. It may take me a while to go through all comments in the queue, please be patient. Thank you.

23 thoughts on “Can We Talk About Pronoun Declaration Best Practices?”