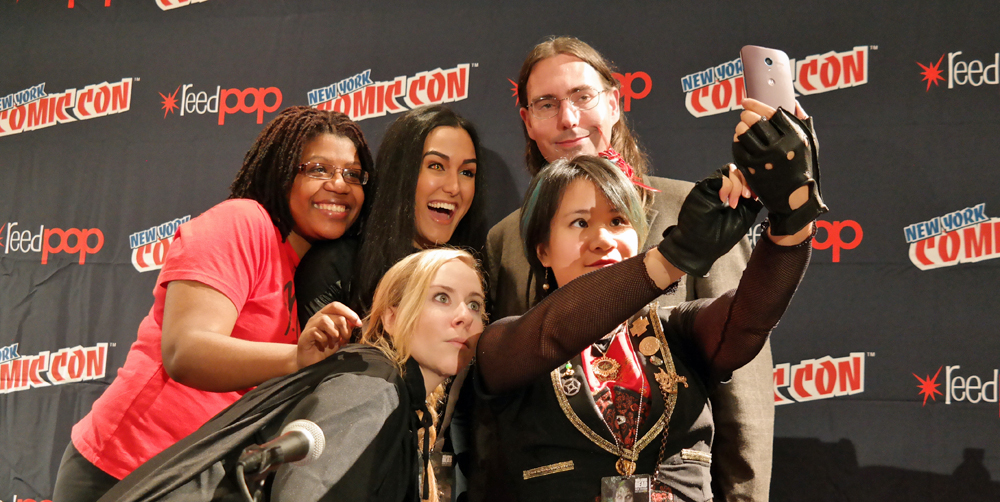 There are so many conversations going on right now sparked by Mark Oshiro’s report1 detailing what happened to him at last year’s ConQuesT convention that it’s hard to just focus in on one aspect to talk about2. There is one thing I want to jump in and speak about right away, which is what should be expected of con staff and ConComs. I decided to write this post after reading Rachael Caine’s post on the situation, in which she says:

But you know what? It’s not necessarily the fault of the volunteers throwing conventions. Audiences and panelists must hold each other accountable if fandom is going to continue as it began. ConComs are not gods. They can’t vet moderators, they can’t interview panelists about every panel topic to see if they’re qualified. They are organizers of a show for which they don’t get paid, and while they do shoulder the burden for responding to bad behavior, WE are responsible for responding immediately to the bad behavior in the first place.

I agree with the overall point of Rachel’s post: that fans and panel participants and pros all need to look out for each other. Many of us already do that because we long ago figured out the importance. It’s the bolded bits that I take issue with. ConComs are not gods, but they sure as hell can vet moderators and can put systems in place to up the chances that panelists are qualified to be on the panels they’re assigned to. I speak from experience as a programming volunteer myself.

I work on the programming committee for WisCon and am most familiar with our system and workflow. I also know a bit about how ReaderCon does things. Both of these cons are relatively small, just as ConQuesT is, both have a volunteer staff, and both have very involved programming.

WisCon programming is a highly collaborative process. We solicit panel ideas from WisCongoers and allow the members to vote on which panels they want to see based on the list of all qualified panels submitted3. You can read an overview of the process on the WisCon blog, if you want more details. After we figure out which panels will happen, we have to decide who gets to be on them. Again, this is a collaborative process. Folks volunteer to be on, to moderate, and the Program team uses a combination of database wizardry and hand selection to get all the panels staffed.

In past years, there have been big mistakes made in this department, such as having a panel about [insert marginalized identity] with only one person of that identity on it (or none), or panels with problematic descriptions, or panels with moderators that just made everything terrible and harmful and triggering. One of my goals in joining the Program staff was to help this not happen–and I don’t think it’s presumptuous to say that all of us on staff have that as a major goal. To that end, we’ve asked for, and received, changes to the programming database that help us identify which volunteers would be best for a panel or, hopefully, which people should not be on certain panels. Some of it is still a function of knowing the folks at WisCon since we’re all long-time attendees as well.

Though our system is very useful, it is not perfect. It’s still evolving, too. We still make mistakes. We try hard not to make the same ones, to be aware of problems that could crop up and nip them in the bud–such as by making sure we mark panels to hand staff so the database’s random assignments don’t put a cis person on a panel about trans people talking about trans issues, for example. We strive to be proactive because we want our attendees and guests to have as great a time as possible.

This is a lot of work, yes. This is necessary work. It’s work that fan cons should do–yes, even if the staff is all volunteers. Because this is important.

Just look at what happened at last year’s GenCon Writer’s Symposium. A dude who is well known for being a problem, especially about women’s issues, was allowed to moderate a panel on women in comics even after The Mary Sue pointed out that the original panel was made up of All Men. ALL MEN. Even after that bit was addressed–hurriedly–Bill Willingham was still allowed to moderate. Marc Tassin, the Writer’s Symposium Track Director, should have known better. Willingham’s viewpoint and attitude are not a secret. And yet.

I expect GenCon to do better, and that con is far, far bigger than ConQuesT. Kansas City fans have pointed out that it is the very essence of a local con. Most folks running it and putting people on panels know each other well and know the panelists. Robin Wayne Bailey4  is a local and, from what I can gather, a regular at that con. Selina Rosen, who pulled down her pants, is apparently a serial pants taker off-er at that very con. Yes, this is a small local con. That means it’s probably even easier for programming volunteers to know that they’ve staffed a panel about diversity and erasure with one person of color and a bunch of problematic white folks who are prone to undressing at the slightest provocation.

It is certainly not possible to predict the behavior of every person, to know the specific background and identity details of every guest and panelist. And there is always room for error. I really need us to not pretend that there aren’t ways to be better, that we shouldn’t demand better while also saying “I will be an advocate and activist about this, too.”

ConComs and programming staff have to be proactive. They have to know what the potential problems are, where the common pitfalls lie, and pay attention to what has happened at other cons so they can avoid making the very same exact mistakes. Nothing that happened at ConQuesT regarding those panels Mark talked about hasn’t happened elsewhere many times5. All of it was avoidable.

Large con or small, the ConComs and program volunteers absolutely must be proactive and address these issues. When they do, it helps to empower the kind of personal response Rachel talks about. And I’ll reiterate: I agree that this is important, too. We, all of us, con staff and guest and attendee, have to look out for each other, speak up, create the kind of spaces we want at our fun community gatherings.

3 thoughts on “Expect More From Your Regional ConCom”