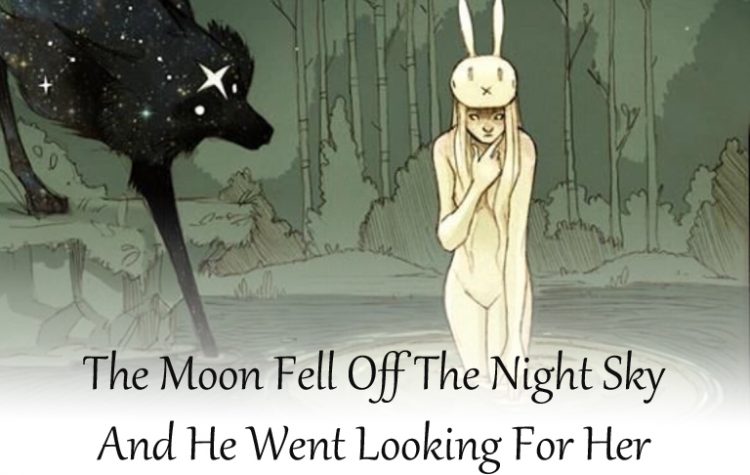 This story is based on the artwork of Chiara Bautista.

She didn’t so much fall off the night sky as she allowed herself to detach, come away, to drift. She wanted, just for a little while, to see things from a different perspective. So much time above the little blue and green planet, watching over it, playing her part in the push pull of water and energy. Acting as a light in the darkness.

Sometimes she would look down and see herself reflected in the waters. The big ones as well as the small. But it wouldn’t be her whole self, her true self. And who was that, anyway?

The beings on the little blue and green earth called her by many names, shaped her into many genders. She had favorites. She chose one and manifested and just

until she was standing on that green ground. Until she had waded out into one of those small waters. Until she saw herself reflected there. The self on the world as well as the self above the world. She stayed there for a night, a day, a night, another day, another night. That’s when she felt him near her. He had to come from so much farther away. And she knew what he wanted.

He had a voice like the animals that howled at the sky when her reflected light was brightest. His voice was deep and rumbling, but not a challenge. Cautious, timid–yet not, because how can a sky full of stars be timid?

Did you get lost?

He waited. She finally turned to look at him. His beauty struck her silent, as it always did. They stayed that way for a day and another night.

This story was made possible by the support of my generous patrons. Thank you!

Join us and get early access to more microfiction and other exclusive perks.

Flash fiction posted in this category by K. Tempest Bradford is licensed under Creative Commons BY-NC-SA 4.0.