Those of you who view the blog proper may notice a couple new covers on the sidebar. I have stories in two anthologies coming out this fall and I’m very excited about both. 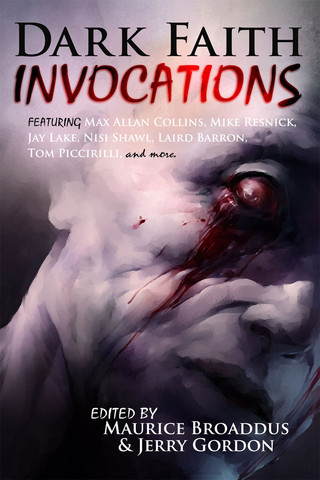 The first one to come out will be Dark Faith: Invocations. From the Apex website:

Religion, science, magic, love, family — everyone believes in something, and that faith pulls us through the darkness and the light. The second coming of Dark Faith cries from the depths with 26 stories of sacrifice and redemption.

My story is “The Birth of Pegasus”. The full TOC is here and includes such awesome authors as Nisi Shawl, Jeffrey Ford and Tim Pratt. It launches at WorldCon in Chicago. If you won’t be there but want to pre-order a copy, click here. (You can get 10% off with coupon code: DFBradford) Next is Diverse Energies, a YA dystopian anthology where all the stories feature characters of color. It will be out in October. I’m sharing a TOC with Ursula K LeGuin. I have not yet stopped doing the boggie about that.

You can’t pre-order Diverse Energies yet but I’ll let you know when you can.

What do you think of the covers?

I’ve been sitting on this for about a week until it was official and such: I just sold my story “Different Year” to the Federations anthology! *cue happy Snoopy dance*

This story was once called Voices From The Heartland and then Same Old Shit, for those who may remember. Many props go to my peeps at Altered Fluid who provided critique and guidance.

A bit of most excellent news — yesterday I found out that Strange Horizons will publish my story Until Forgiveness Comes!  Yay!  SH is one of my favorite magazines and a market I really, really wanted to crack.  And that story is, I believe, one of the best I’ve ever written.

Apparently SH sent out a bunch of acceptances yesterday as I saw at least one mentioned on my flist and my fellow Altered Fluidian, Kris Dikeman, also got one.  I’m pretty sure AF is taking over markets one by one, as three or four of us have something coming up in Electric Velocipede as well.

I should also say that the story benefited tremendously from critiques from both Altered Fluid and, later, the Black Beans (who took a look at the revision I did for SH, mentioned here).  Big thanks, y’all :)

My story will come out in late 2008/early 2009, and I’ll definitely make mention when it does.  And next month my Podcastle story comes out.  Lots to look forward to.