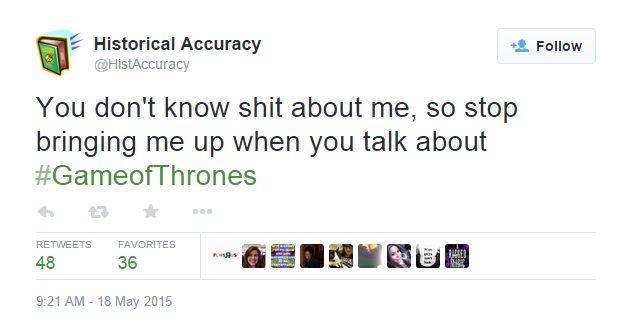 One of the more ridiculous aspects of this week’s discussion around Game of Thrones is how often people try to trump any complaints about (among other things) the abundance of rape or the dearth of POC characters with agency with: But Historical Accuracy! The number of people I’ve seen talk about how things were back then with all seriousness would be hilarious if it weren’t so sad.

Public Service Announcement: Game of Thrones is a fantasy novel, not a historical one. It does not take place in the past, it takes place in a fantasy world that shares some aspects of our actual past with many elements that are made up, including dragons, White Walkers, and people who can come back from the dead.

All of the elements in Game of Thrones are there because George R.R. Martin put them there. He, as the author, made choices and decisions and continues to do so. He uses history as a guide, but guess what: he’s allowed to do whatever he wants because he’s the author.

If a woman is raped in the story, it’s because he wrote it that way, it didn’t just happen because “that’s the way it was.” If all the brown-skinned people are slaves or savages1, it’s not because anyone forced him to conceptualize them that way.

Anyone who tries to argue otherwise probably has no real clue what’s historically accurate, anyway, and they also don’t understand how speculative fiction works. 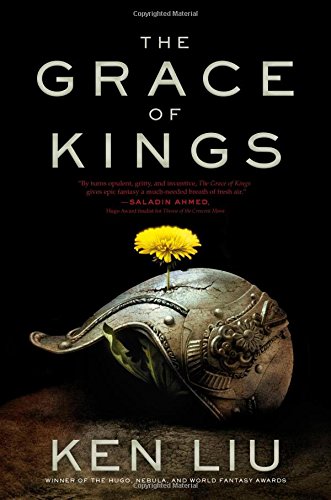 Want an example of an author who gets this? Come here and let’s talk about Ken Liu’s The Grace of Kings.

The novel is set in an alternate world in the island empire of Dara, a fantasy analogue for China. The series depicts a fictional, fantastic version of the fall of the Qin Dynasty and the rise of the Han Dynasty. There are several analogues to real people and real events in this first book. There are also major differences, especially in the technology available. And then there’s the treatment of women.

It’s easy to go with the default assumption that all past cultures were patriarchal in nature and therefore women have to be confined to certain roles and no man ever questions this or does anything about it. Liu doesn’t do that. He does the opposite.

At one point the two main characters are hunkered down in a town with an army waiting to destroy them outside. The army general can’t get them to come out and fight, so he attempts to lure them out with taunts. Flyers descend depicting the men dressed in women’s clothing and accusing them of being cowards with “feminine hearts.” The gendered insults are many and varied, but they all boil down to: these men are like women and therefore weak.

One of the main characters responds by asking “what is so bad about being compared to women? Half the world is women.” He later gives a speech about the courage of women, using events seen in the book up to that point as examples, and concludes:

“By custom, we wield the sword and wear the armor, but who among you does not know a mother, sister, daughter, friend, who exceeds you in courage and fortitude?

So let us no more think of being compared to women as an insult.”

Think this isn’t historically accurate? It might not be. But Ken Liu made a choice to give his character, a pragmatist, a logical reason to reject sexist nonsense.

This kind of thing happens more than once in the book. On top of that, all of the major and minor women characters get complex personalities and backstories. Some fit in to what might be considered traditional roles or types, many do not, all of them are well drawn3. I won’t say the book is some feminist utopia. I will say that the choices Liu made feel deliberate and considered. He didn’t let “Historical Accuracy” get in the way of creating characters that weren’t insulting to modern readers.

Every spec fic author has this option, this power. They are the creators of the world inside their books. Every aspect of a fictional world is a choice, even if the choice is “it was like that in the 1300s in England so it’s like that in my world, too.” That’s fine, but let’s not pretend that that isn’t what you chose and not something forced on you by God, History, or The Rules Of Writing.

Acknowledging this means that we have to stop responding to “There’s a lot of unnecessary rape in these books” with “That’s the way it was” and instead with “The author chose to include all that rape. Why? Is it really integral to the plot and character arcs, or is it down to laziness? Misogyny? A fondness for rape?4” Pushing aside that convenient excuse leads to a number of uncomfortable questions, doesn’t it?

And Historical Accuracy is an excuse, not a reason. Period.

3 thoughts on “The Historical Accuracy Fallacy”