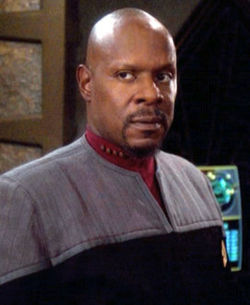 Over on my Tor.com Star Trek post I noticed something that I often see but don’t always comment on: the dismissal of Captains Janeway and Sisko (and their shows) as being bad, or mediocre, or not as good as Kirk/TOS, Picard/TNG or even Archer/ENT (wtf?).

I’m used to Janeway hate. Voyager started shaky, founds its footing, then fell on its face when a blond in a skin-tight jumpsuit wandered by. There were many individual moments of great television, but nothing that truly cohered. Plus, Janeway is a woman, and the sexism-laced commentary about her being too manly or too feminine or too whatever have flowed since the show began.

What I don’t understand is the lack of love for Sisko, who was by far the best Star Trek captain since Kirk. Deep Space Nine was the most ambitious and complex of all the shows, and explored issues that were sometimes touched on in the original series but rarely approached in The Next Generation. I realize that Star Trek began as Wagon Train in space, but is there no room in the franchise for a show that required a bit of deep thought?

What I’ve always wanted to do, and am now taking the chance to do, is to ask: what exactly do you dislike about Janeway and/or Sisko? And let’s not pussyfoot around here: I want concrete examples, not vague “she was too feminine!” bullcrap. I want to know in what way did Janeway’s femininity made her worse or negatively different than Kirk or Picard or Archer, if that’s your stance. Whatever your issue, bring it on.

73 thoughts on “Standing Up For Sisko And Janeway”