Oddly, I haven’t seen too many reviews of EV 17/18, which is a sadness! But apparently Tangent Online did a review of the entire issue, including my story Enmity. Check it:

…a cerebral exploration of the creation story, spanning ancient Greek mythology, Christianity, and probably some other sources I haven’t picked up on too.

…Now, my knowledge of classical civilisation is limited at best, so it took a great deal of Wikipedia research even vaguely to understand what was going on here. Poor Eurydice goes from creator of the world, to Adam’s Eve and back again. She dies, lives, creates and destroys, all with little idea of who or what she really is, and by the end of it all I felt just as mixed up as Eurydice herself. In that sense, Bradford did well to carry me through the narrative as well as she did, but there is no real plot to speak of. I think the ‘point’ of this piece is to portray the eternal, cyclical relationship between good and evil, and to demonstrate how it transcends theology.

My intent was less good and evil but women and men. Perhaps I tripped over my own subconscious there.

People often run up against the same issue the reviewer did when it comes to my mythpunkish stories — I pack in a lot of mythology, some recognizable by folks with a passing knowledge, some not. Apparently my target audience consists of people who have not only read a lot of mythology and folklore from various ancient civilizations but who’ve also delved into the cultural forces that shaped those mythologies and, perhaps, have also done some research into how folklore and mythology change as the socio-cultural landscape of a region or a people change.

In other words, me, Veronica Schanoes, and Helen Pilinovsky. It’s a narrow audience.

Still, I’m glad the reviewer liked it despite the confusion. Though I wonder why she objects to the line “Rape is a metaphor. And it also is not”? There’s more to the review, so click over and read the rest. And, if you haven’t read the story yet, it exists online.

No, this is not about online fights.

As many of you know, I have a story in the latest issue of the Hugo award-winning zine Electric Velocipede. The editor asked if he could put my story online in its entirety to tempt people into buying the whole issue. I said yes immediately because I heart having my stories both online and in print.

Today it went live, so you can check out Enmity on the EV website. I hope you enjoy. This was my first Mythpunk story (before I even knew what Mythpunk was!). I was inspired by the stuff I learned in my creation myths class. Like Black Feather, I drew from many different versions of myths and many different myth traditions. It’s pretty cool the connections you can find by just looking for common elements and symbolism.

A gentle reminder that the Diaspora of the Fantastic reading is this Thursday. I’ll be reading alongside N. K. Jemisin, Alaya Dawn Johnson and Linda D. Addison at Bluestockings. Details here.

I am going to read from my Electric Velocipede story, Enmity, because I’m not sure if I’ll ever get the chance to read it for an EV thing. Plus, it was the first mythpunk story I ever wrote and I have longed to show off my mythpunkiness.

At WisCon I was able to quietly sneak away with a copy of the latest Electric Velocipede (issue 17/18!). I was super excited to see it because my story Enmity is contained within. There are also stories by many friends of mine, including two other Altered Fluidians: Mercurio D. Rivera and Matthew Kressel.

I saw John Klima during his brief appearance and got to hug him a lot. Then on Sunday I wore The Shirt. You know, this shirt: 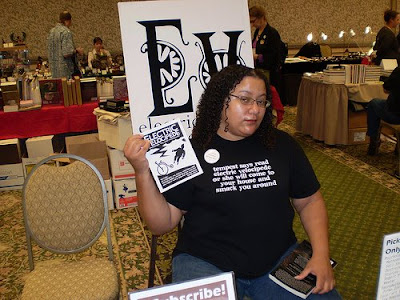 I have it on good authority that The Shirt moved many copies of the zine. (Also, if you are a fan of EV or of shirts or of me, you can get The Shirt on Zazzle and support the zine in the process.)

This May has been especially awesome for me because I had stories in a book and two zines come out this month. Federations, Sybil’s Garage 6, and Electric Velocipede 17/18 — and all of them were available in the dealer’s room. There were also many copies of the Interfictions anthology and all three WisCon Chronicles! I’m in each, and the newest one is especially spiffy with a fantastic cover. Liz Herny is a goddess.

I was feeling very fancy having so many things in the room with my stories and essays in, so I took pictures: So I encourage you to order your copy of Sybil’s Garage if I didn’t force it ony ou at WisCon, to buy Federations and WisCon Chronicles vol. 3, to check the Electric Velocipede blog to see when the latest issue will be available for ordering (the copies at WisCon were special advance ones — contributors and subscribers should get theirs soon), and to read, read, read, not just my stories, but all the fabulous stuff in these offerings. May 2009 is a month of awesomeness.

On the heels of the stunning Federations cover comes this from the next issue of Electric Velocipede:

Yes, I do see Will Shetterly, too. I am trying to pretend he is not there.

There are plenty of fabulous writers in this issue and you must buy it.  You know you want to.  If you don’t buy and read it, well…